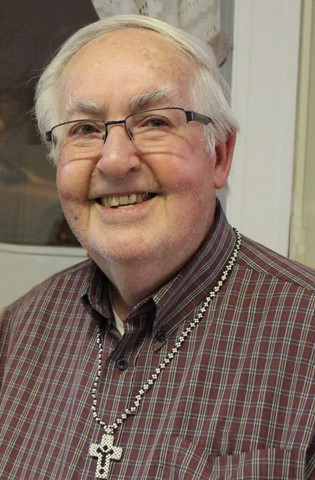 Father André Dumas, priest of the Foreign Missions, passed away in Laval on November 7th, 2019, at the age of 84 years and 9 months. Born in St-Norbert d'Arthabaska on February 5th, 1935, he was the son of Désiré Dumas and Céa Gauvreau. He attended secondary school at the Nicolet Seminary and fulfilled his theological studies at the Grand Seminary of the Foreign Missions of Pont-Viau. Ordained priest on July 2nd, 1960, he left for Honduras on September 21st, 1961 where he worked as a missionary until 2015.

In Canada, he worked in the Missionary Animation Service from 1985 to 1989. At the time of his death, he was retired at the Central House in Pont-Viau. He leaves in mourning, besides his fellow missionaries, his sister Jeanne-D'Arc, as well as nephews, nieces and many relatives and friends.

Last Saturday, we had the funeral of our confrere Marc. Today, we are gathered to say goodbye to André, my classmate. It's always the same ritual. Do we get used to it? Of course, we face death. It's always the same question : what is there after death? Is there something after earthly existence or nothing at all ? We think about it, but we well know that it is not for the moment. But when an event reaches us deeply, like the diagnosis of a serious illness, we are led to reflect on what awaits us after the end of our life. The influence of the spiritual and religious currents from the East has added other considerations to our beliefs of Christian tradition. Recent statistics reveal that over fifty percent of Catholic baptized people in the West believe or are seriously interested in the theory of reincarnation. According to this, globally, one returns to earth after death, in another body, as often as necessary to purify one's soul in order to attain nirvana, or eternal life.

Buried with him at our baptism, we are already participating in his resurrection to stay with him with all that we are, our personal or community history. We have only one life on earth that continues in Christ with the Father.

Each existence opens to a love story between God and a person, unique and irreplaceable for him.

We believe that salvation is given to us by Christ, he knows us by name and accompanies us in our history. He purifies us and forgives us, he offers us the strength of his Spirit to open us to his presence and make us live on his promise : eternal life with him and the Father, in the Holy Spirit.

Thus, to believe in the resurrection is not only to turn one's gaze towards the Beyond, it is to give meaning to the earthly life. Faith in the resurrection recalls the uniqueness of human life that cannot be repeated. To say that no life will ever be repeated is to take freedom and responsibility seriously today, it is to affirm the importance of the choices made here and now.

An analyst said that people still have faith, but faith in a God they make themselves.

I wonder if this is not the temptation that threatens us a little everyone We have faith, but we try to adjust it. We have no difficulty with everything the Church teaches us, but without really realizing it, we make small changes for our personal situation. We believe in heaven, in the resurrection of the dead, but not for the time being. One thing is for sure, our relationship with God is absolutely unique and personal. There is a place in the deepest part of ourselves that is inhabited only by God himself. No one else has access to this place.

In his life, Jesus shows us a way to keep calm in the midst of the turmoil of life, just when we are assaulted, misunderstood or hurt. No ordeal reaches us if we have reunited our divine nature with our human nature.

You remember when Jesus told Pilate that his kingdom was not of this world. It is Saint Augustine who speaks of the meeting of time with eternity. Is it not precisely the feelings that inhabit us at this moment?

In the first reading, the author begins by recalling that human beings are created in the image of God and, as such, they participate in his endless life. The Lord never wishes to see them perish. The souls of the upright are in the hand of God; no torment can touch them. To the unenlightened, they appeared to die, their departure was regarded as disaster, their leaving us like annihilation; but they are at peace. As it seemed to us, they suffered punishment, but their hope was rich with immortality.

If there is one who took the resurrection seriously, it's André. He spent a good part of his life in Honduras. For André the question of time is over. He is now in eternity. He has arrived in the kingdom that God has promised him. He is in the hand of God. And one day, we will meet him again.

We will continue our life by witnessing to our faith in the Risen Christ precisely by the way of living our life, our trials, our joys, our commitments, the times when death threatens and strikes.
May the Lord hold us in love and perseverance until the moment when the day will come up for us when we will see God.